Ellen G. White Statements Related to the Observance of Christmas and Holiday Gifts

“Christmas is coming,” is the note that is sounded throughout our world from east to west and from north to south. With youth, those of mature age, and even the aged, it is a period of general rejoicing, of great gladness. But what is Christmas, that it should demand so much attention? This day has been made much of for centuries. It is accepted by the unbelieving world, and by the Christian world generally, as the day on which Christ was born. When the world at large celebrates the day, they show no honor to Christ. They refuse to acknowledge Him as their Saviour, to honor Him by willing obedience to His service. They show preference to the day, but none to the one for whom the day is celebrated, Jesus Christ.

From the Pen of Inspiration…

From “The Great Controversy”

Sometimes this ol’ world can be overwhelming. I suppose that’s an understatement, huh?

As I was looking for something else this morning I came across this… I hope it’s encouraging.

There, immortal minds will contemplate with never-failing delight the wonders of creative power, the mysteries of redeeming love. There will be no cruel, deceiving foe to tempt to forgetfulness of God. Every faculty will be developed, every capacity increased. The acquirement of knowledge will not weary the mind or exhaust the energies. There the grandest enterprises may be carried forward, the loftiest aspirations reached, the highest ambitions realized; and still there will arise new heights to surmount, new wonders to admire, new truths to comprehend, fresh objects to call forth the powers of mind and soul and body.

All the treasures of the universe will be open to the study of God’s redeemed. Unfettered by mortality, they wing their tireless flight to worlds afar–worlds that thrilled with sorrow at the spectacle of human woe and rang with songs of gladness at the tidings of a ransomed soul. With unutterable delight the children of earth enter into the joy and the wisdom of unfallen beings. They share the treasures of knowledge and understanding gained through ages upon ages in contemplation of God’s handiwork. With undimmed vision they gaze upon the glory of creation–suns and stars and systems, all in their appointed order circling the throne of Deity. Upon all things, from the least to the greatest, the Creator’s name is written, and in all are the riches of His power displayed.

And the years of eternity, as they roll, will bring richer and still more glorious revelations of God and of Christ. As knowledge is progressive, so will love, reverence, and happiness increase. The more men learn of God, the greater will be their admiration of His character. As Jesus opens before them the riches of redemption and the amazing achievements in the great controversy with Satan, the hearts of the ransomed thrill with more fervent devotion, and with more rapturous joy they sweep the harps of gold; and ten thousand times ten thousand and thousands of thousands of voices unite to swell the mighty chorus of praise.

“And every creature which is in heaven, and on the earth, and under the earth, and such as are in the sea, and all that are in them, heard I saying, Blessing, and honor, and glory, and power, be unto Him that sitteth upon the throne, and unto the Lamb for ever and ever.” Revelation 5:13.

The great controversy is ended. Sin and sinners are no more. The entire universe is clean. One pulse of harmony and gladness beats through the vast creation. From Him who created all, flow life and light and gladness, throughout the realms of illimitable space. From the minutest atom to the greatest world, all things, animate and inanimate, in their unshadowed beauty and perfect joy, declare that God is love.–The Great Controversy, pp. 677, 678.

From the pen of Ellen G. White

The sanctification set forth in the Sacred Scriptures has to do with the entire being—spirit, soul, and body. Here is the true idea of entire consecration. Paul prays that the church at Thessalonica may enjoy this great blessing. “The very God of peace sanctify you wholly; and I pray God your whole spirit and soul and body be preserved blameless unto the coming of our Lord Jesus Christ” (1 Thessalonians 5:23).

“PROPHET OF THE END” (from Harvestime Books)

The present writer has in his files a book, published a hundred years ago, by a French monk who overheard a secret planning session of top leaders of the Society of Jesus (the Jesuits). Taking it down in shorthand, he later published it. The unveiling of future plans can be shocking, as they were in this instance.

Ellen White, in vision, also overheard a top planning session,—but this one of Satan and his angels. Here is his plan to destroy you, and all who would wish to come to God or serve Him in these last days…

Note: The “homepage” is at the bottom.

From the Pen of Inspiration…

The Time of Trouble

from “The Great Controversy between Christ and Satan“

“At that time shall Michael stand up, the great Prince which standeth for the children of thy people: and there shall be a time of trouble, such as never was since there was a nation even to that same time: and at that time thy people shall be delivered, everyone that shall be found written in the book.” Daniel 12:1.

When the third angel’s message closes, mercy no longer pleads for the guilty inhabitants of the earth. The people of God have accomplished their work. They have received “the latter rain,” “the refreshing from the presence of the Lord,” and they are prepared for the trying hour before them. Angels are hastening to and fro in heaven. An angel returning from the earth announces that his work is done; the final test has been brought upon the world, and all who have proved themselves loyal to the divine precepts have received “the seal of the living God.” Then Jesus ceases His intercession in the sanctuary above. He lifts His hands and with a loud voice says, “It is done;” and all the angelic host lay off their crowns as He makes the solemn announcement: “He that is unjust, let him be unjust still: and he which is filthy, let him be filthy still: and he that is righteous, let him be righteous still: and he that is holy, let him be holy still.” Revelation 22:11. Every case has been decided for life or death.

The Great Controversy between Christ and Satan:

From the pen of inspiration…

My dear brethren and sisters,

Let the commandments of God and the testimony of Jesus Christ be in your minds continually and let them crowd out worldly thoughts and cares. When you lie down and when you rise up, let them be your meditation.

Live and act wholly in reference to the coming of the Son of man. The sealing time is very short, and will soon be over. NOW is the time, while the four angels are holding the four winds, to make our calling and election sure. 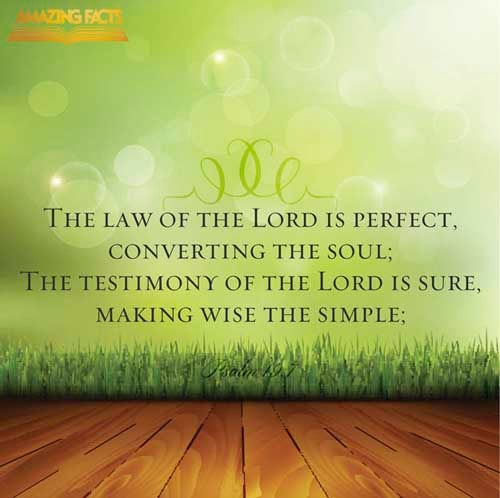 By Beholding We Become

Secure with Jesus through End Times

In this age, just prior to the second coming of Christ in the clouds of heaven, such a work as that of John [the Baptist] is to be done. God calls for men who will prepare a people to stand in the great day of the Lord. . . . In order to give such a message as John gave, we must have a spiritual experience like his. The same work must be wrought in us. We must behold God, and in beholding Him lose sight of self.

But we all, with open face beholding as in a glass the glory of the Lord, are changed into the same image from glory to glory, even as by the Spirit of the Lord.

The Acts of the Apostles

The church is God’s appointed agency for the salvation of men. It was organized for service, and its mission is to carry the gospel to the world. From the beginning it has been God’s plan that through His church shall be reflected to the world His fullness and His sufficiency. The members of the church, those whom He has called out of darkness into His marvelous light, are to show forth His glory. The church is the repository of the riches of the grace of Christ; and through the church will eventually be made manifest, even to “the principalities and powers in heavenly places,” the final and full display of the love of God. Ephesians 3:10.

"The Lord covers Himself with a cloak of light... He makes the clouds His chariot; He walks upon the wings of the wind." Psalm 104:2-3